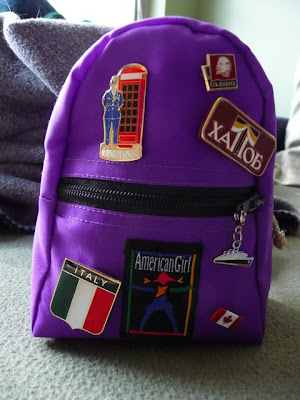 Weekend at the farmhouse

I'm really lucky, and here's why-

My Mama's family has a cabin. My Mama has been going to the cabin since she was a baby. Any girl in the world would be so happy to have a cabin like mine.

But that's not all, my Daddy's family has a farmhouse! His ancestors traveled across the frontier as pioneers all the way from Denmark and Sweden and settled in Mount Pleasant Utah, where they built the farmhouse. My Daddy's family still has the farmhouse which means that if we are not at the cabin, or traveling somewhere else, my family is likely to be at the farmhouse. It is not really a farm. A long time ago it was, but now it is just a small house on the edge of town. 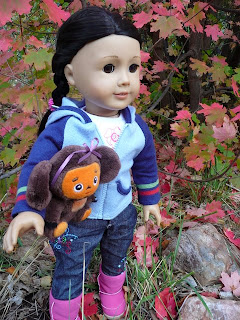 This weekend we went down to the farmhouse. Aunt Chelsea brought Jess, which was really fun because Jess and I played stuffed animals all weekend (I brought Cheburashka, of course!). Mama got sick though, so that was sad. I wanted to snuggle her and make her feel better, but she said I was too squirmy, so I got up to play with Jess some more.

On the way home we did the Nebo Loop, which is a scenic drive where we looked for fall leaves and bears. We saw lots of fall leaves, but not any bears. I wanted to see a bear eating or running, that would have been cool. Cheburashka liked the fall leaves a lot. 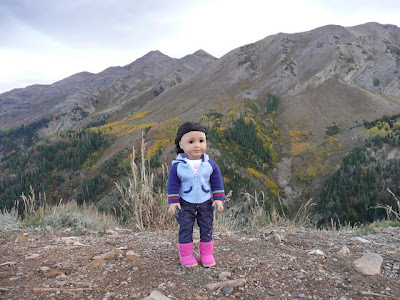 Did you know I've been to a lot of National Parks? One thing that National Parks do is preserve different type of ecosystems that are special to our earth.

So which National Parks have I been to?

I've been to Yosemite. This is a very special park because this is where Mama and Daddy got married. This is my favorite park too. 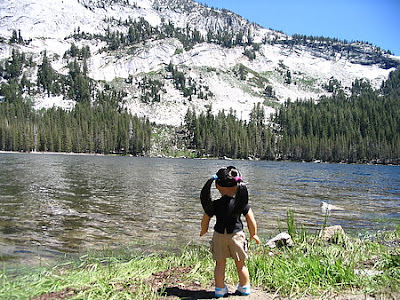 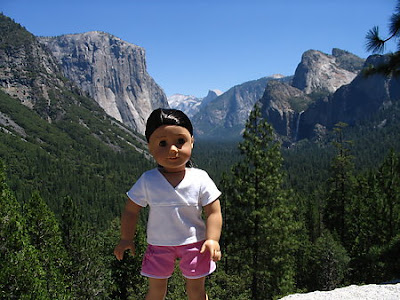 I've been to Bryce National Park. Bryce is famous for red sandstone pillars called Hodos. You can hike among them! 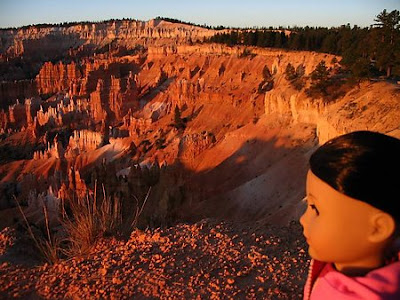 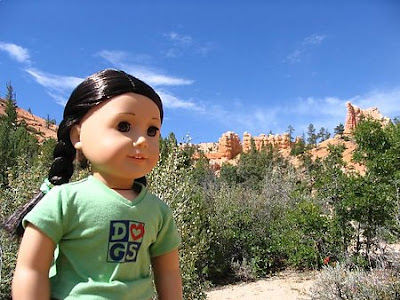 I've been to Grand Teton National Park, in the winter! It was so snowy and cloudy, we didn't get to see the Tetons. I hope to go back soon. 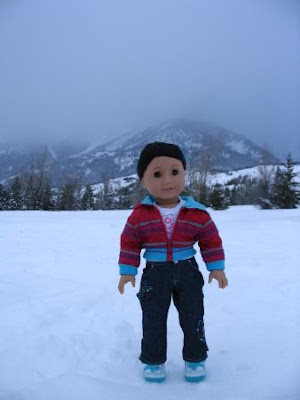 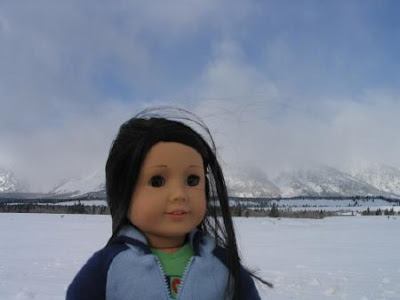 Also, I've been to quite a few parks and National Historic sites with my hosts, including Jamestown, Williamsburg, and Richmont Battlefield.
Posted by Violet at 11:49 AM 1 comment: 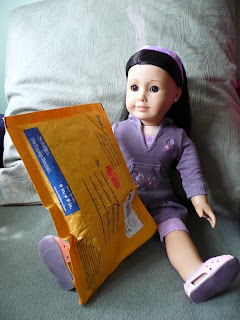 This afternoon I was busily working on school work when I noticed the mailman left something on the porch, so I got up to see what it was, and it was a package addressed to me! I looked to see who it was from, and it was from Inky, my Russian friend living in NYC!

Well I quickly went upstairs, and opened the package. Inside were lots of very thoughtful presents from Inky, here is what there was:

1. Some new earrings. Inky read on my blog that my ears are pierced, and she was nice enough to send some new earrings. I can't wait! My favorites are the red ones, which is Inky's favorite color, so I will think of her when I wear them.

2. Cheburashka stuffed animal. This is a Russian cartoon about a little monkey named Chuburashka, and it is Inky's favorite! Anyway, I got the stuffed animal that goes along with the show. I love him, he is so soft and cute!

3. Cheburashka cartoon! Not only did I get the stuffed animal, but I got the movie that goes along with it! I am so lucky! The entire cartoon is in Russian, so Mama said I could watch it this afternoon instead of doing my reading, because she wants me to practice my Russian (I've already forgotten a lot). Anyway, I watched the second episode, the one that is Inky's favorite, and it is so funny! I love Gena the crocodile. 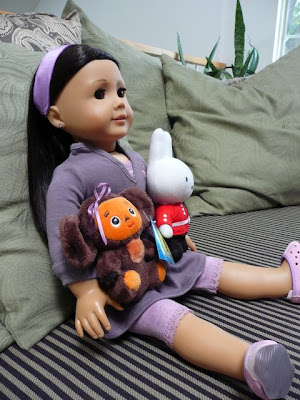 Here I am watching my new cartoon with Cheburashka on my lap (and Miffy too).


Here is one of the episodes, if you have a few minutes you can watch it too!

Because I'm not traveling now, I thought I'd post about some of my past travels. My first international trip was to Victoria Canada, and this was my very first trip alone!

Did you know that in about two weeks I'm going to Canada again? It is true! Mama and Daddy are not joining me on this trip, I will be visiting a host family up near Calgary. I am so excited! I'm not sure what we will do, but the last time I went to Canada I really had a great time.

Last time I went to Canada I visited Alexis in Victoria (which is on the west coast). Alexis is really really nice, and she is special because she was my first traveling host. There were lots of girls at Alexis's house, which made it more fun. We were so busy when I was there, I was always exploring new places.

One day we went to Fisgard Lighthouse, and another day we went downtown Victoria. We also went hiking in a coastal rain forest, explored Victoria's China town, made cookies, and so much more! My favorite thing in Canada was Butchart Gardens, the Japanese gardens were the best part.

Here are some of my favorite photos from my trip and here is a link to my Victoria Canada album.

Here I am in the Japanese gardens in Butchart Gardens. 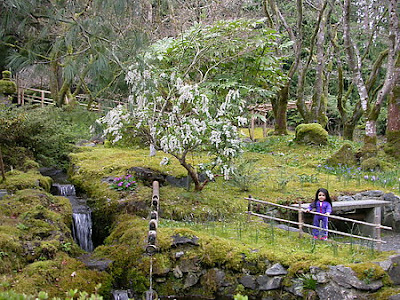 Visiting Chinatown with Jade was so fun, because she took me to her favorite shops and restaurants! 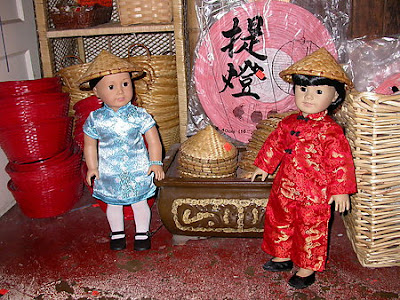 One of my favorite days was seeing Fisgard Lighthouse, it is the oldest Lighthouse on Canada's west coast and was first used in 1860! 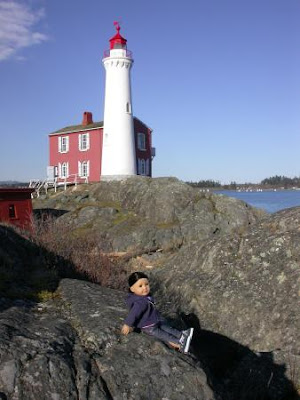 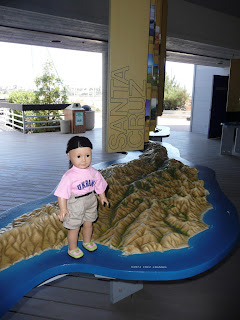 This blog entry I am titling the same as my Mama's entry (seen here) on Santa Barbara, because we both love Santa Barbara. I didn't think I would be able to travel so soon after our big trip to England, but then again, I am a travel doll! J

My little family (I am the only child remember) left on Saturday morning to Santa Barbara because my Mama had a cousin getting married there, and she was going to do a story on the Chanel Islands National Park. 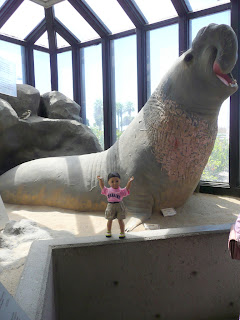 We got there around noon and went straight to the Chanel Islands visitor center where we saw some tide pools, a model of an elephant seal, and we looked through a telescope towards the islands. These islands are only about 15 miles off the coast of California, but are undeveloped, and have lots of unique animal species.

After seeing the visitors center, we headed to the beach. I love the beach. The water was colder here than on New York beaches, and that is because California isn't along the gulf stream that keeps the east coast waters warm (I had to do a California report for school before we left, so I learned that!).

Once at the beach, we swam, looked for shells, relaxed in the sun, and collected seaweed. I found six different types of seaweed on just one beach, and now Daddy says I need to do a seaweed report for school. 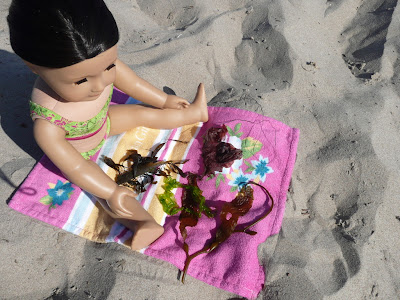 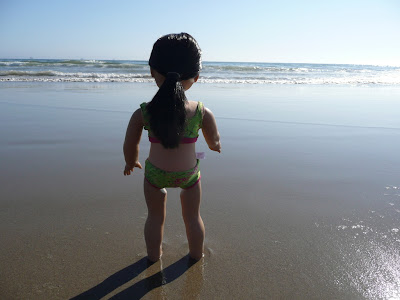 Before we left California we did another special thing, visit the original Queen Mary. This was really fun because we just sailed on the Queen Mary 2. The original ship was built in 1936, but was soon turned into a troop ship for WWII. Once the war ended they turned it back into a passenger ship until she retired in the 1970s.

The ship was really big, but really small compared to the new Queen Mary. I felt so special to be able to see both ships, not many travels dolls are so lucky! 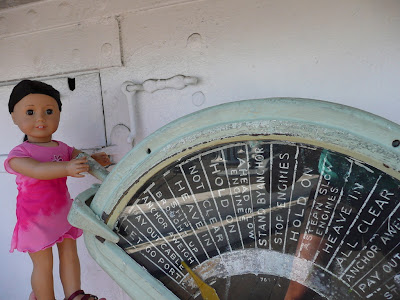 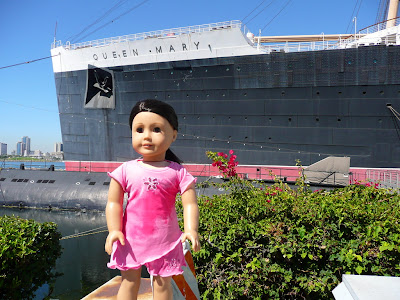 On the way out I noticed something, a Russian Submarine docked next to the ship, and of course I thought of Inky, my Russian friend. Inside the gift shop there were lots of communist gifts, and Lenin items, boy would Inky be crazy about this place! Maybe one day, I can go there with her, and show her around. 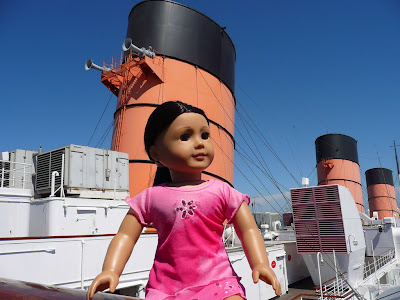 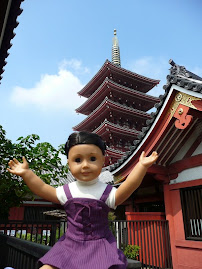 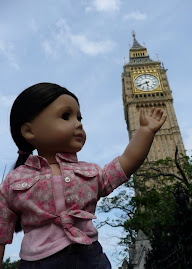 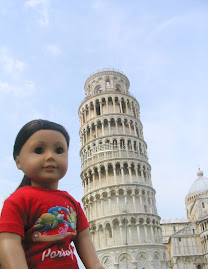 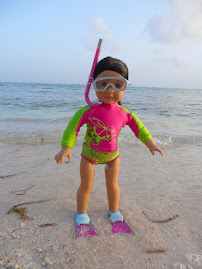 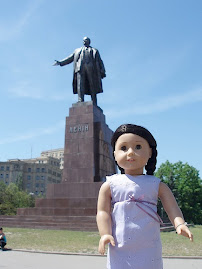